Building a Bold Brand as a Mobile Journalist 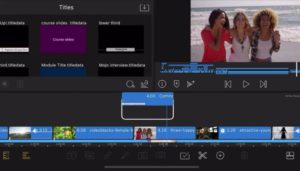 Cross-posted from ProVido Coalition.  [By Ron Dawson]  “Caroline [Scott] was previously based in the South Atlantic where she developed a television station and its news programming for the population of the Falkland Islands. Since then, she has produced content for the BBC, ITV, Thomson Reuters, Associated Press, Journalism.co.uk, and British Forces Broadcasting Service.

Like many other journalists, she has turned more and more to mobile journalism. This has become particularly key during this age of COVID lockdowns where access to office editing suites and camera studios has been limited.

Caroline’s become so adept at it, that now she teaches fellow journalists, filmmakers, and television producers how to shoot and edit on their smartphones. She also keeps her love for country music alive through her western lifestyle blog, City Cowgirl, where she promotes country music and culture in London.”

Building a Bold Brand as a Mobile Journalist