Berenice Abbott: She Was a Camera 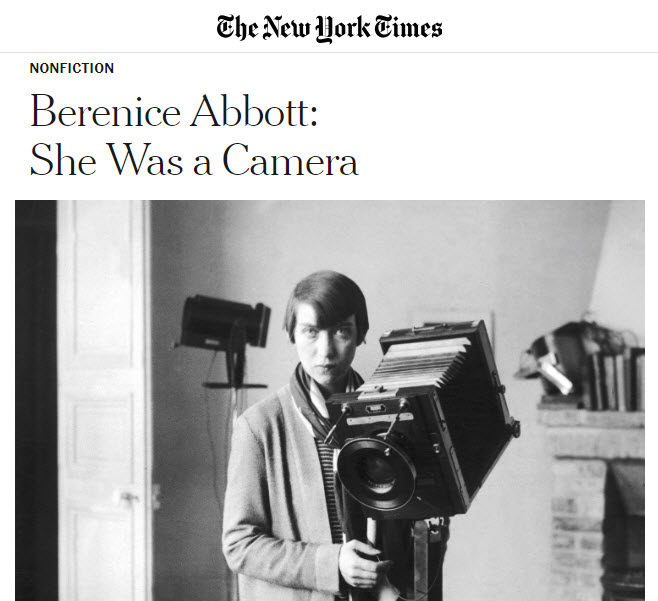 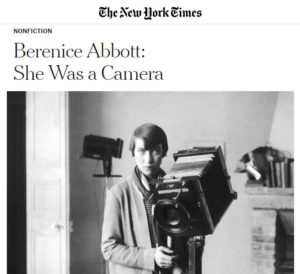 Editor’s Note: The New York Times has just published two reviews of books about two of the great photographers of the twentieth century who were contemporaries, but could hardly have been more different in their approach and subjects. Berenice Abbott, after an early start as a portraitist in Paris (following an assistant-ship with Man Ray), spent the remainder of her life photographing structures and buildings. And single-handedly rescued the career (and work) of Eugene Atget.

Cross-posted from The New York Times
[by Deborah Solomon]

Most of America’s greatest photographers set out to be something else. Berenice Abbott wanted to be a sculptor. Born in Springfield, Ohio, in 1898, she never thought of studying photography in college because such courses did not exist. Her “aha” moment occurred in Paris, where she was living in the 1920s, an expatriate enamored of art. In need of money, she took a job as a darkroom assistant to Man Ray, the Brooklyn-raised Dadaist and devotee of the absurd. He supported himself as a photographer, and before long Abbott left his employ, set up a rival portrait studio on the Rue du Bac and surpassed him as a pictorial chronicler of James Joyce, André Gide and other members of the European avant-garde.

Returning to New York in 1929, Abbott abruptly gave up portraiture. She wanted to photograph America, or rather make New York and its architecture her primary subject. Most of the work on which her reputation rests was done in the 1930s, when she took some of the best-ever photographs of the city. Her specialty was crystalline black-and-white images that lavish equal attention on steel skyscrapers and crumbling brick tenements. Working with a bulky view camera that could record the most minuscule details, ducking her head beneath a black focusing cloth and then peeking out, she took photographs that demanded long exposure times and are so crisp and hyper-legible that you can make out the price of a loaf of bread in a bakery window (10 cents) or the titles of the dozens of now-defunct magazines displayed in long rows at a Midtown newsstand (Ballyhoo, anyone?). Her most popular photograph, “Night View, New York,” from 1932, offers an overhead view of Midtown that is oddly oblivious to the disfigurements of the Depression. It creates a portrait of New York as the electric sum of thousands of street lamps and lighted office windows, an ode to a city that works.