ASMP is pleased to announce the awarding of an honorary membership to James Edward “Ed” Westcott, the official United States Army photographer for the United States Manhattan Project during World War II, who has been nominated for the Presidential Medal of Freedom. 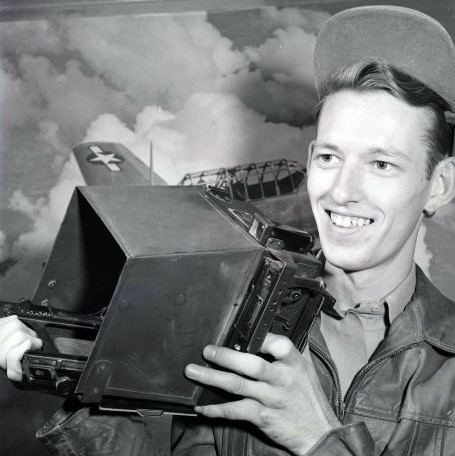 Image: US Army photo of Westcott with one of his Speed Graphics, with a special lens hood that he made for doing photos from a helicopter. It would keep the wind from buffeting the camera when he was sitting in the doorway. The camera was fairly heavy and was hard to hold while changing film packs as the aircraft changed locations.

ASMP was advised of Ed’s nomination for the Presidential Medal of Freedom by his son, Jim Westcott, ASMP Life Member and former Tennessee Chapter Board of Director. Learning of Ed’s nomination, ASMP Executive Director, Tom Kennedy, submitted a request to the ASMP National Board of Directors to award 96-year-old Ed Westcott with an honorary membership due to his pivotal role as a photographer during a critical period in our country’s history.

Ed Westcott was one of the first employees hired for the Manhattan Project in Oak Ridge, Tennessee. Today, thousands of Westcott’s images are in the National Archives, and select images are part of a traveling exhibit that has been displayed at the East Tennessee History Center, the National Archives of Atlanta, and the U.S. Space and Rocket center in Huntsville, Alabama. View the documentary film about Ed and his work at Oak Ridge produced by Oak Ridge historian and Atomic Heritage Foundation Board Member, D. Ray Smith.

In addition to his lifetime role as a photographer, Ed Westcott was also a licensed amateur radio operator, and was a member of the Army MARS, a Department of Defense sponsored program which utilizes Amateur Radio operators to contribute to the mission of the Department of the Army. Ed was recognized in 2018 by CQ Magazine for his role as a photographer who chronicled the Manhattan Project during World War II and later helped the FBI with its investigation into the Jonestown mass suicide and murder, with his induction into the 2018 CQ Magazine Amateur Radio Hall of Fame.

Inside the Secret City: The Photography of Ed Westcott