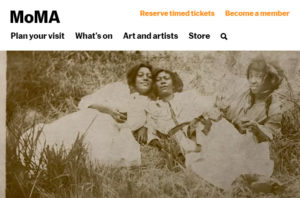 Cross-posted from the MoMA Magazine. [By John Jeremiah Sullivan]

“As a privileged white guy who writes a lot about Black history and culture, I prepared myself early on to take lumps for the unavoidable degree of cultural appropriation present in the mere act of doing the work, and I will not lie: at times it can feel vampiric. I tell myself that my reasons are relatively pure: I was drawn to the subject not out of white Southern guilt (my family fought and died for the Union), nor even, in the beginning, out of an especially well-developed political ideology, but by a storytelling instinct, which I trust as a fundamentally human faculty. The Black experience in this country is one of the most dramatic and wrenching stories in American history full stop. For reasons familiar to us all, it has received through the centuries much less attention than its white counterpart, to say nothing of material resources put toward its preservation. It is also true that at multiple junctures in American history it has been in the interest of the power structure to suppress, if not erase, whole chapters of Black American history.”