A New Book from a Renowned Photographer of Interior 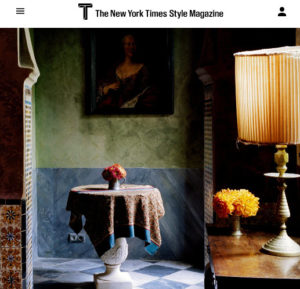 “Throughout his career, Simon Watson has brought his unique eye to crumbling castles, monastic apartments and everything in between.”

“But mostly the photos speak for themselves. Those of Casa Horta, the architect and furniture designer Guillermo Santomà’s surrealist Barcelona home, show a bubblegum pink dining room with plastic lawn chairs that Santomà partially melted with a blowtorch, as well as a still-life of fruit and architectural elements painted directly on the wall by the artist Marria Pratts. “When I stepped in, I immediately thought, this guy is great; this guy has got such a vivid imagination,” Watson says. Another architect with a distinctive vision, Arno Brandlhuber, fashioned Antivilla, his lake house near Potsdam, out of an old East German underwear factory, using sledgehammers to smash asymmetrical windows into the concrete walls. “It’s abrupt and Brutalist, not dissimilar to Brandlhuber himself,” says Watson. Clearly, it’s the personal details that linger with him: “The place where someone lives is a portrait of who they are,” Watson says. “You can tell their humor and their character.’

A New Book from a Renowned Photographer of Interior