A Chat with Photographer Steve McCurry About His Life and Work 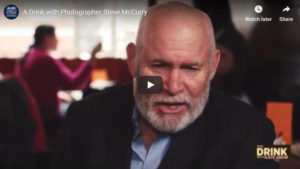 Cross-posted from PetaPixel
[by Michael Zhang]

Renowned photographer Steve McCurry recently sat down with journalist Kate Snow for a drink and to chat about his life and career. This 15-minute segment by NBC Nightly News offers a peek into the mind of the celebrated (and recently controversial) photographer of Afghan Girl fame.

One of McCurry’s original motivations for becoming a photographer was a desire to travel the world. After not being able to get a job in filmmaking — his original path — McCurry got a job with his local newspaper as a photographer.

After getting bored with covering local news, McCurry bought a one-way ticket and headed to India. He would later go into Afghanistan, which became his big break in the photo industry after Russia invaded the country.