Over the past week, our Copyright Counsel Mike Klipper and I have been busy in Washington D.C. laying the groundwork for our federal legislative agenda in 2019. This week’s activities followed closely on the heels of a very successful hearing on September 27, 2018, on the CASE Act before the House Judiciary Committee; the hearing described in Jenna Close’s recent article, Advocacy is a Verb: My Testimony on the Hill. At the hearing, Jenna joined Keith Kupferschmid, CEO of the Copyright Alliance, and David Trust, CEO of Professional Photographers of America (PPA) in testifying about the need for the CASE Act.  Their respective testimonies eloquently laid out the rationale for the CASE Act, while rebutting positions articulated by the opposition, principally from “copyleft” groups and trade associations representing the tech giants.

On Monday, we joined our colleagues representing other visual groups to discuss our 2019 agenda and also met separately with Keith Kuperschmid, and then Karyn Temple Claggett, Acting Register of Copyrights and Director of the U.S. Copyright Office to discuss the CASE Act and other aspects of copyright reform that the USCO will be seeking to address going forward. 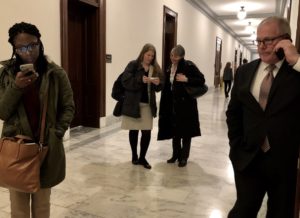 In addition to the CASE Act, we discussed the much-needed modernization of USCO’s slow and antiquated registration procedures, our ongoing concerns about the inequitable fee structure proposed by the USCO, and the problems caused for individual creators and small businesses by the published/unpublished registration dichotomy.  We underscored the critical fact that changes to the registration process would yield little or no benefits for our members unless they were also accompanied by adoption of the CASE Act.  Absent a viable alternative to the cumbersome and prohibitively expensive federal court system, we reiterated that individual creators and small businesses would have no real incentive to register their works.  These conversations were valuable, enabling us to fully express why we are continuing to push for reforms that would enable individual creators to more fully participate in and benefit from the copyright system. 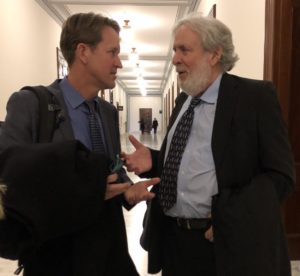 Our first Hill meeting this week was with the staff of Rep, Hakeem Jeffries (D-NY) who is the chief House sponsor of the CASE Act.  That meeting with the Jeffries staff focused on our sharing the provisions that we would like included in the version of the CASE Act to be introduced in the new Congress.  Our subsequent meetings were with staffers from both Republican and Democratic members of the Senate Judiciary Committee.  Our primary goal in these meetings was to ascertain the prospects for securing sponsors for a Senate version of the CASE Act to be introduced in the upcoming Congress. All of these meetings were productive and we will keep you apprised on our efforts to secure Senators as supporters for the revised CASE Act.  Once we have some initial Senators on the bill, we are hoping to get simultaneous introductions in the new Congress so that the legislation could be considered before larger pressing issues for both House and Senate Judiciary Committees get taken up.

In addition, ASMP continues to support the passage of S1010, a bill that would make the appointment of a new permanent Register of Copyright to be a presidential appointment.  Passage of this bill is critical since it would put in a place a Register who can then attend to the copyright changes envisioned in the CASE Act and other areas of reform we have been discussing.

As you may have surmised, the recent mid-term elections have brought a number of new Members to the House and changed the majority party governing the House.  That will mean that the House Judiciary Committee gets new members and therefore we will likely need to do more education on our advocacy positions for those new members.

Our conversations with Representatives, Senators, and their staffs will continue over the next month, notwithstanding the holidays.  Mike and I will keep you informed as events warrant.  You can anticipate that we will be calling on some of you to reach out to the Senators we are seeking to have sponsor the companion bill to HR 3945, and that we will want you to continue to request support for a new version of the CASE Act from those Representatives in the House who have already committed to sponsoring the legislation.