Questions with a Pro: John Slemp 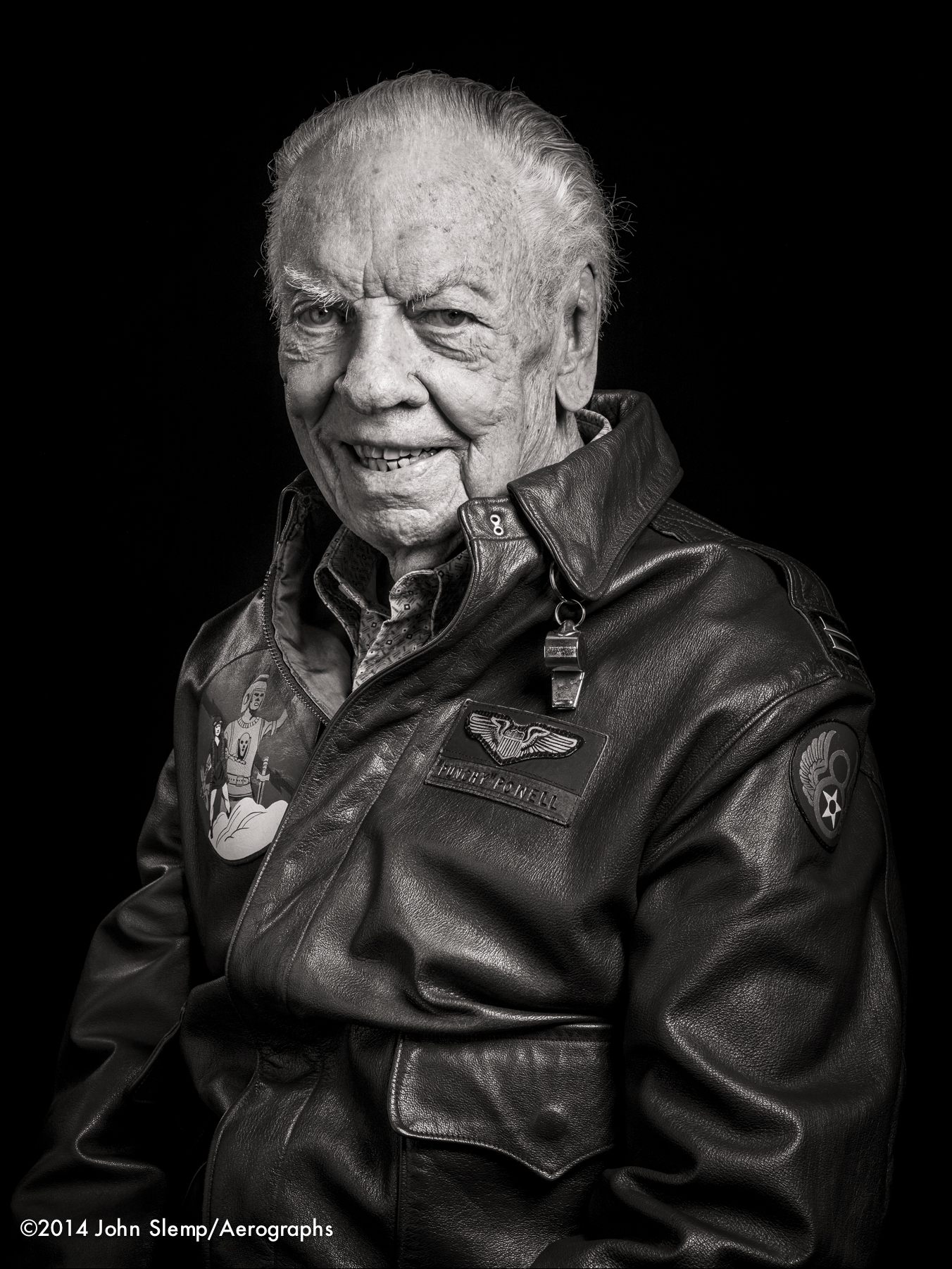 This week’s Questions with a Pro features John Slemp.

John is an aviation photographer operating out of Atlanta, Georgia. He has been the Membership Chair for ASMP’s Atlanta Southeast Chapter in the past and now holds the position of President. He is a military veteran himself and is currently working on an extensive project focusing around WWII Bomber Jackets. Here, John details this project, explains what led him to being a licensed drone pilot, and a bit about his strategy on set.

We asked: Please describe your WWII Bomber Jacket Project. How did this project come about, and what were you hoping to accomplish through it?

John said: Ideas pop into my head all the time, and sometimes they just won’t let go. You know the kind…they sit in the back of your mind…percolating…like one of those old fashioned coffee makers. The brown liquid just keeps bubbling and splashing around in the glass knob, until the heat is turned off. Only…the idea never turns off. So it becomes a part of one’s conscious thinking…which means it’s time to start planning, exploring, and examining the possibilities. Such was the case when a project photographing World War II “bomber jackets” was contemplated.

Inspiration comes in many forms and mine came from a series of antique motorcycle jacket photographs seen several years ago, created by Dan Winters. A long-time film devotee, he photographed them on a white lightbox, shot from overhead with a 4×5 camera. They were beautiful too, in their simplicity, their “grunginess,” and their diversity. While the technique is not new, the subject matter was. (As an aside, Albert Watson created images using the same method many years ago, photographing artifacts from all over the world, including Elvis’s pistol, an astronaut glove, fetishes from Morocco…).

Since childhood, uniforms and military history have been a personal fascination. My dad was a career soldier, a Green Beret most of that time, until a parachute jump injury left him one jump away from being a permanent cripple. Growing up in that environment it was common to see soldiers on post, wearing all sorts of uniforms. Fatigues, “Class A” uniforms for parades and “Dress Blues” for formal events are all deeply rooted in function and military history. So it is with the A-2 flight jacket, and the M422 jacket Naval aviators wore in WWII.

The end goal is a coffee-table book, something that I’ve always admired about the great photographers of the past.  Currently I don’t have a publisher, and it may wind up as being self-published, which I’m fine with.  As many will tell you, it’s not done for the money, but it has generated a great deal of personal satisfaction in that many people like the images, and when one is not pursing assignment work, it lends direction in a specific area.  Many consultants will tell you to create a personal project, as it is purely self directed, which lets clients see how you think, how you light and compose, and perhaps just as important, what you choose to focus on.

As a veteran myself, it’s not something that is terribly foreign to me, and I feel a special relationship to the stories, and the people that I’ve met while working on the project.  If the veteran is still available, I also create a portrait, and if possible a video interview as well.

We asked: What drove you to becoming an FAA licensed drone pilot? How has this license affected your business?

John said: I thought that it might prove to be beneficial from a photographic and business perspective to offer an “overhead” view.  As someone who routinely thinks in three dimensions, it was easy to see how it could be incorporated in the grand scheme of things. The advertising image below was shot from the roof of a hanger, and I routinely shoot from cherry pickers about 20-30 feet high. They are fine as long as one doesn’t do anything that might cause the center of balance to shift!

I’d already been studying for my private pilot’s license, so the material in the FAA drone exam wasn’t really new, and I just needed a refresher before I took and passed the licensing test.

While I like the overhead perspective for many things, for obvious reasons it’s not easy to gain permission to shoot from a drone at an airport, which is primarily where I’d like to use it.  The permissions system is becoming more streamlined and accessible, so that is less of a challenge than it once was.  I can’t say I’ve used it a ton in business, as it’s a money losing proposition to join the legions of hobbyists who will, for a hundred bucks, shoot a home offered by the local real estate agent.  Most of the time, the footage (digitage?) is forgettable at best, and there is no attention paid to licensing.

The other hindrance for me is that it’s one thing to fly the drone…it’s quite another to shoot from it at the same time, and get compelling results.  It takes a lot of practice to do it well, and I’m not totally sold on the image quality yet either.  So the jury is still out for me and drones.

We asked: What is your strategy when planning and executing on set? what is your approach?

John said: Preparation is key for me when thinking about creating images for a client.  Having assisted established photographers myself for almost five years, I saw how proper preparation…or lack thereof, could influence the outcome of a shoot.  Perhaps the most important thing for me is to pre-visualize the images that will be created during the shoot, based upon the client’s needs.  The equipment, props, models, etc. will all flow from the shot list (and I do use a list, as I can’t keep something like that in my head during a shoot!), and I create an outline of how it should go.  I don’t get too detailed, unless necessary, as it can preclude any ideas or changes that may spontaneously occur during the course of a shoot.  Inspiration often leaps out of the hidden recesses of my mind, and if not allowed to flourish, can lead to stilted results.  I prefer to grab it when appropriate, and see where it leads.  Of course, one shoots what has been agreed to on the outset, and then make deviations/changes from there.  That way, both “angles” are covered, and both you and the client have options afterwards.

One other thing I should mention is that I don’t look at a lot of other photographers work, at least not in my discipline.  It can become quite easy to subconsciously lean towards creating images that mimic another’s work…a place I’d rather not go.  Plus, I take it as a personal challenge to always be thinking about what’s possible in an image.  If I’m going to copy someone else’s work or style, why not just hire them?

After preparations have been completed, the estimate agreed to, and the equipment, models, locations, props/aircraft are in position, I prefer to vigorously execute the job.  Why?  My energy level is high, everyone is still fresh and ready to go, and it engages the mind.  You’ll often hear that baseball teams prefer pitchers who work quickly, as it keeps the defensive players engaged and on their toes, so to speak.  I like to take the same approach.

We asked: You have done endless work as the Membership Chair and now President for the Atlanta Southeast ASMP chapter. What led you to this position, and how has your involvement with ASMP affected your work?

John said: I guess I’ve held about every position at the local level one could, and served for five years on the national board as well.  My involvement with ASMP was actually an act of desperation, as after I left the military it became apparent to me early on that I could approach commercial work in a professional manner, or just stumble through it as so many do.  I’m not a big fan of trying to fix a mess after the fact, so I joined ASMP while still assisting so I could become as prepared as I could to enter the market in a professional manner.  It was essential to me to know how to create a thorough estimate, how to craft an image license properly, and how to protect my work through proper copyright registration.

There are any number of ways to approach the business of commercial photography…most of them wrong.  It was always important to me that I enter the marketplace using professional business practices, not only for my peace of mind, but also because I didn’t want to soil the already hard-won ground by those who had come before me.  This has stood me in good stead, and has allowed me to remain friends with many of the photographers/mentors that had so generously schooled me in the art of creating an image.

It has also inspired me to teach new assistants how to conduct business, and to create an atmosphere of learning and sharing, so that all may benefit.  To my mind, that strengthens the marketplace, enabling all of us to thrive.

I often tell people that “I don’t know everything about photography, but I’ve got friends who do!”, which is true.  The friends I’ve made in ASMP have greatly enabled me to feel part of a greater whole, which is important since so many photographers are sole proprietors anyway, and can easily feel isolated.  It’s also allowed me to tap into members, both friends and strangers, to ask questions and advice on a variety of topics related to commercial work.  This is not so easily done outside the boundaries of a professional organization, and is worth its weight in gold.

We asked: How would you describe your evolution as a photographer over the years? What has changed and what has stayed the same?

John said: My evolution…is probably still ongoing.  At least, I’d like to think so, because even though I’ve been shooting for over twenty years now, I almost always learn something new on a job.  Whether it’s a new lighting technique, a new way to solve a visual problem, or a new way of handling a client, I always find it fresh.  It’s probably the thing I like most about this kind of work…is that it never gets old, and is always a challenge.  As to what has stayed the same?  Hopefully my enthusiasm for creating meaningful, artful, work that not only satisfies a client’s commercial need but my own need to create artistic work.  Not always easy or possible, but it’s always something I strive for…