Is Royalty Free the bargain they claim?

In photography as in anything else, you get what you pay for. Royalty-free (RF) stock may look like a bargain. But it has some serious drawbacks, too, and these can affect the value of what you buy.

The biggest worry is that another designer might easily pick the same image. RF collections are marketed far and wide. You and your competitors have the same CDs and subscriptions, and so do many total strangers. Anyone can use those images, at any time, for any purpose. That means you must gamble that the sheer number of images in all the competing RF collections will make a duplicate use unlikely. On the surface, it may seem a safe bet. But there are reasons why it’s not.

Leaders get followed. Advertisers, art directors and editors tend to follow the current styles and trends in commercial imagery. Even if you are a leader and a maker of new trends, there are plenty of less original people in your business; the herd instinct operates here just as it does elsewhere.

During the dot-com boom, for instance, quite a few advertisers thought that PhotoDisc’s picture of George Chen, a vaguely Asian lad with spiked hair, would evoke 20-something trendiness and Internet savvy. And it did — briefly, until the image got overexposed. (Chen’s story was told in the August 1, 2002, New York Times.)

A popular student. In late summer of 2004, Dell and Gateway featured the same model and the same location in their back-to-school campaigns.

Term-limited. RF publishers select images for their collections that have broad appeal. Then they keyword them to support image searching. And because they use a controlled-vocabulary word list, everyone who is building a campaign around a concept — a seasonal theme, an emotional association, a product category — has to work within a specific range of search terms. The result is that the same images are likely to turn up on every designer’s list.

Why not the best? After a word search has found some candidate photos, each designer will pick the best ones. You see the problem: Becauseeverybody wants the best, the relatively few good choices stand a significant chance of being picked for many projects.

Collision. When two designers pick similar images to illustrate their ideas, they both have a problem. Perhaps the products are grossly disparate, such as health aids and mortuary services. The October 2004 issue of Consumer Reports got a laugh at advertisers’ expense from just such a situation. (The magazine regularly highlights these and other advertising malapropisms in its “Selling It” column on the inside back cover.) It’s even worse if the products are similar — and the clients are bitter competitors.

It’s not just a theoretical problem: In 2004, Dell and Gateway featured the same model and the same location in their back-to-school campaigns. And it must have been a lovely May morning in Paris when Wanadoo and Cegetel, two competing providers of high-speed Internet access, posted the same photo — Photoshopped a bit, but easily recognizable — on their respective home pages. 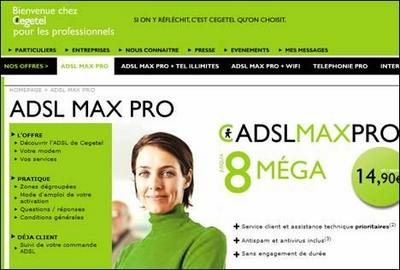 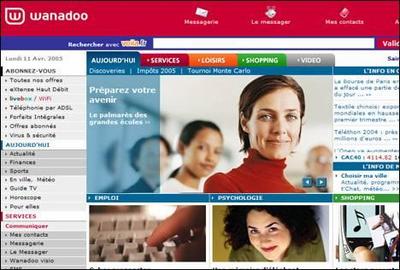 Head to head competitors. In May 2005, two rival ISPs in France briefly ran the same photo on their web sites. Despite the Photoshop work, both were embarrassed.

Blogged. In olden times — say, before 2002 — you could hope that most of your target customers wouldn’t notice an oopsie like that. Today, there’s a horde of bloggers ready to tell the world about each and every marketing blunder they find, and they have the skill and patience to find quite a lot.

Here’s one blogger’s tale that’s quite amusing, except perhaps for the advertisers involved: An unsolicited commercial love story.

Not that the mainstream press is any easier on its victims. Microsoft has surely gotten over this embarrassment by now.

RF production is a high-volume, quick-turnaround business. Not all RF vendors are equally careful about model releases and other paperwork. Marginal operators and inexperienced entrepreneurs — who often have the lowest prices — may skimp on such details, which can saddle you with unexpected costs long afterward. Unless you can obtain a copy of the release, you don’t really know that it exists or what it says.

Juries can take models’ rights very seriously. Consider, for example, the $15.6 million judgment against Nestlé for misusing a model’s image. The story appeared in the February 1, 2005, Los Angeles Times.

The best way to obtain a memorable and unique picture is to assign a good photographer to shoot some custom work. But often your branding requirements must be traded off against other constraints, such as staying within budget and meeting the deadline. Stock photos have always played a role in striking the right balance.

But where RF stock is anonymously and promiscuously available, rights-managed stock is carefully and selectively licensed. Rights-managed stock offers a middle ground between the expense of commissioning a special shoot and the cost of brand erosion if the product’s signature image appears in an unrelated context. It is less costly to the photo buyer because the photographer expects to spread the cost of creating the image across several separate licenses over the lifetime of the image. At the same time, it protects the buyer from conflicts by keeping a clean market separation between the image’s uses.

This is why a license is customarily phrased in terms of a particular set of rights and guarantees granted to the buyer. As you would expect, this careful definition of rights serves to protect the photographer’s revenue. But it also is a valuable protection for the buyer. It is the mechanism by which the photographer knows what each image’s usage has been and will be, so that potential conflicts can be avoided. The various forms of exclusivity in the rights license (by length of time, geographic territory, display medium, etc.) are time-proven techniques for eliminating the market overlap that leads to brand confusion. 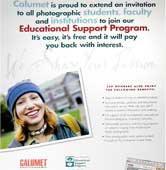 Hey! There she is again!

Striking the balance. One of the advantages claimed for the RF business model is that marketing plans often change at the last minute, and RF requires no bargaining for additional rights. But it is easy enough to avoid reopening negotiations when using rights-managed stock, too. How? Raise the issue of additional uses during the initial discussions. A photo buyer who’s been around the block can usually anticipate the normal contingencies, and most photographers and agents will be happy to nail down the prices and terms for various options at the outset.

In fact, both the photographer and the buyer will benefit by setting up a package deal with predefined alternatives. In particular, the photographer can take proactive steps to keep the buyer’s options open for the full range of marketing scenarios. The buyer can present a full range of alternatives to the client, complete with budget numbers. And, with everything wrapped up in one bargain, both parties can relax and go about their core businesses.