In the past few weeks, I have had a few encounters with images that reminded me how powerful the photograph has been and continues to be in our culture. 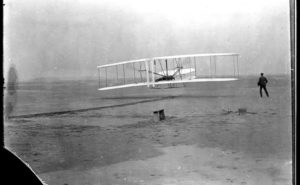 The first was at the Wright Brothers Memorial in Kills Devil Hills, North Carolina where one of the most famous photographs in the world dominates the exhibition. The photograph itself was made by one of the men hired to help move the plane back on to the launch rail after each test.

What struck me about the photograph was how we believe it to be true and that it is all that remains of this pivotal moment in history.

The Wrights recognized the power of photography to verify and communicate their success, so they acted quite intentionally to acquire a camera and have it ready. The plane was destroyed after 4 flights, leaving 3 exposed glass plates as the only proof. In fact, this photograph was used to validate the Wright Brother’s achievement that day and has since become an iconic image.

There is power in the veracity of the photographic documentation of flight, but there is even more power in the narrative of the photograph – the reality of the moment is conveyed with the innovators captured in relief inside of and next to the machine they built. The shovel and the bench in the foreground give us an understanding of the tenuous nature of this enterprise that birthed the age of air and space travel.

My other two encounters were more contemporary. The New York Times published a multimedia piece on the January 6 Capitol riot created by gathering thousands of still photographs, audio and video clips, and putting them together on a timeline mapped to the architecture of the U.S. Capitol. 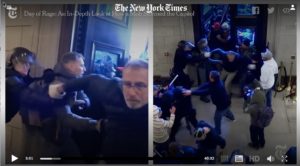 The power of this compilation is that it creates a logical organization of images and audio generated by many different people (amateurs and professionals alike), so that as a viewer you get a graphic and detailed understanding of what happened and who was responsible. It is only through photographic technology that this event could be conveyed in this manner.

My third encounter was with Virginia Public Media’s broadcast of “How the Monuments Came Down”, which uses historical photographs and video clips to explore the history of white supremacy and Black resistance in Richmond, Virginia where I have lived for much of my life and have worked on my own photographic project about the monuments.

The video is possible because there were photographers making images of all the people and places that are part the story of how the Confederate monuments came to be and how they are being removed today. In some cases, the photographers understand the historical value of their image. For example, when the white establishment created tableaus and events around the statues, they were carefully staged for photographers to reinforce the social and cultural repression symbolized therein. But these images are in stark contrast to the portraits of families suffering under Jim Crow laws and the activists protesting them made by many other photographers. Their photographs bring the true purpose of these monuments to life – they provide context, and the viewer can make a human connection.

Early in photography studies and training, we photographers learn how to control the viewer’s perception of the subject – framing, lighting, point of view – all these and more can be applied by a skilled photographer. So, we understand from the moment we pick up the camera that we are creating a fiction based on the technical, compositional, and postproduction choices we make that will be perceived as reality.

The veracity of the medium gives the photographer an expressive voice – a visual vocabulary understood and validated across cultures and languages. The moment a person begins to make photographs with intention, they become part of the arc of photography history and join a global community. That transformative moment happened to me and perhaps it happens to every photographer.

My love for photography, how it has become an integral part of my being and professional career, has a lot to do with the power of photography. 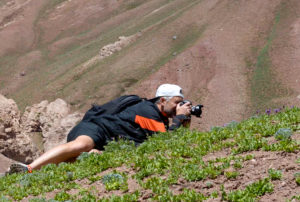 ….or lighting something to tell someone else’s story with commercial photography… 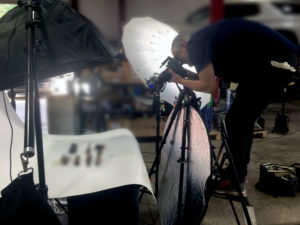 ….Or creating my own stories…. 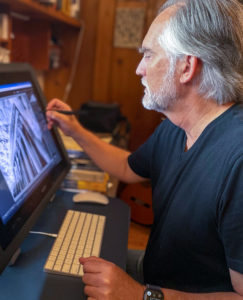 …or teaching others how to express themselves and their ideas… 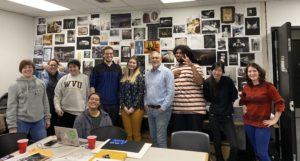 …all of this is built on the power of photography to tell the story of our time – to produce convincing images that integrate my expressive voice with that of my subject to create a meaningful experience for people looking at the photographs I make.

Received a bi-lingual high school education in Buenos Aires, Argentina before attending the Universidad de Puerto Rico and Bethel University in St. Paul, Minnesota – graduated with a BA in Fine Arts.  After working a year as a professional photographer in St. Paul began graduate work at the University of Iowa  – received an MA in Sculpture and an MFA in Photography.

Work in photography and digital media has been broad and comprehensive, including advertising and portraiture, as well as unmanipulated work in landscape and documentary, and manipulated photographic imagery using appropriation and digital montage. Was an early adopter and pioneer in using computers to enhance, animate, and montaged photographs.

His work in higher education has taken him to work in various international locations.  Currently the Dean of Liberal and Fine Arts at the University of the Bahamas, one of the new programs that he is working on building is a bachelor’s degree in digital photography.  This work reflects the dual nature of his career, where on the one hand he is invested in the development of emerging artists while maintaining his own creative work and research. Living in another culture other than his own is how he grew up, but also gives him an opportunity to connect photographically to new subjects and other artists.