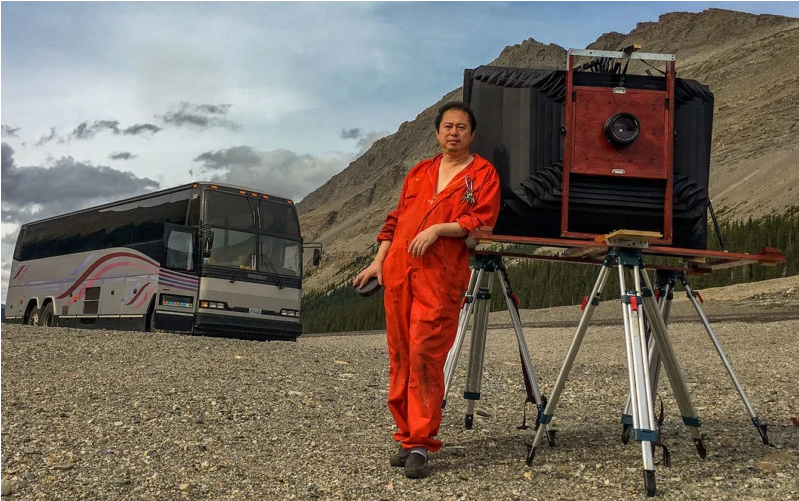 Cross-posted from petapixel.com [by Phil Mistry]

The collodion wet plate process has one very critical requirement: the photographer must be able to coat, expose and develop the plate while wet within 15 minutes. This would be fine for shooting in a studio with an attached darkroom for quickly developing, but Hao had other ideas. He wanted to take the camera out to his favorite spots in the Canadian Rocky Mountains and shoot landscapes.

The instant processing requirement led to a traveling darkroom, which also had to be huge. Hao built one out of a Prevost bus/RV.

The wet plate collodion photographic process was invented by Frederick Scott Archer in 1851 in England as he was dissatisfied with the poor definition and contrast of the calotype, invented by William Henry Fox Talbot, which used paper negatives.

By the end of the 1860s, wet plate collodion had almost entirely replaced the first-announced photographic process, the daguerreotype. It was relatively inexpensive, using glass instead of silver-coated copper plates, and did not require polishing equipment or the highly toxic fuming boxes needed for the daguerreotype.

Gelatin dry plates—glass plates with a photographic emulsion of silver halides suspended in gelatin started replacing wet plate collodion in the 1880s. This was more convenient and more sensitive, which helped reduce exposure times. George Eastman developed a machine to coat glass plates in 1879 and opened the Eastman Film and Dry Plate Company, reducing the cost of photography.