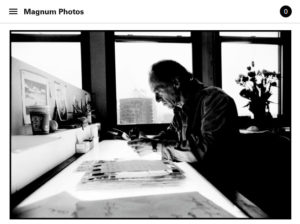 Paul Fusco worked as a photographer with the United States Army Signal Corps in Korea from 1951 to 1953, before studying photojournalism at Ohio University, where he received his Bachelor of Fine Arts degree in 1957. He moved to New York City and started his career as a staff photographer with Look, where he remained until 1971.

In this role he produced important reportages on social issues in the US, including the plight of destitute miners in Kentucky; Latino ghetto life in New York City; cultural experimentation in California; African-American life in the Mississippi Delta; religious proselytizing in the South; and migrant laborers. He also worked in England, Israel, Egypt, Japan, Southeast Asia, Brazil, Chile and Mexico, and made an extended study of the Iron Curtain countries, from northern Finland to Iran.

Related: Paul Fusco, Photographer on a Funeral Train, Dies at 89