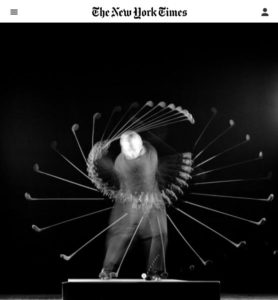 Cross-posted from The New York Times. [By Glenn Collins]

“Leonard Kamsler, a photojournalist whose award-winning pictures of professional golf for nearly 50 years pushed the envelope of sports strobe photography as he amassed a trove of more than 200,000 images on the PGA Tour, died on Nov. 18 in Bethel, N.Y. He was 85.”

“Starting in the 1970s, Mr. Kamsler widened his field to profile performers in Nashville, including Johnny Cash, Dolly Parton, Waylon Jennings, Tammy Wynette and Loretta Lynn. Many of his pictures became the covers of record albums.

His collection of music images was recently purchased by the Country Music Hall of Fame and Museum in Nashville, where many are on view. More than 20 of his photos were shown in “Country Music,” the 2019 documentary series by Ken Burns for PBS.”