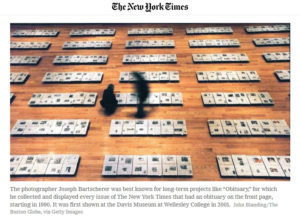 Cross-posted from The New York Times. [By Steven Kurutz]

“Joseph Bartscherer, a fine-art photographer who created rigorously conceptual work about the constructed world, the natural world and the intersection of the two, was found dead on Aug. 13 at his home in Brooklyn Heights. He was 65.”

“Mr. Bartscherer’s four-decade career as an artist was defined by long-term observation and doggedness of focus. His works included “Canal,” for which he traveled along a 19th-century canal between Liverpool and Leeds, in England; “Nevada,” a deep dive into that state’s geology; and “Forest,” for which he returned again and again over a decade to a section of New England woods to capture, in rich color, the changes to an eternal landscape.”

“Mr. Bartscherer’s work was shown at galleries including Marian Goodman and Peter Freeman in New York and Galerie Philip Nelson in Paris. In 1995, the Museum of Modern Art included him in its influential continuing New Photography exhibition. His work was acquired by MoMA, the Whitney Museum of American Art and the Los Angeles County Museum of Art, among other institutions.”