Join us for a webinar led by Richard Vallon. Our guest via Zoom will be Mike Keesling, Academy award winner for his various technical efforts. Mike will discuss, among other things, his inventions the Image Shaker and the Squishy lens.

When an American spy is handed a drink with a Mickey Finn in it by a gorgeous female Russian spy, the squishy lens will distort the image and let you see his spinning blurry world moments before he blacks out. The image shaker is a novel prismatic way to introduce a violent shaking to a film scene without shaking the camera (or the actors). It is useful for those times someone is pushing the Starship Enterprise to go too fast. 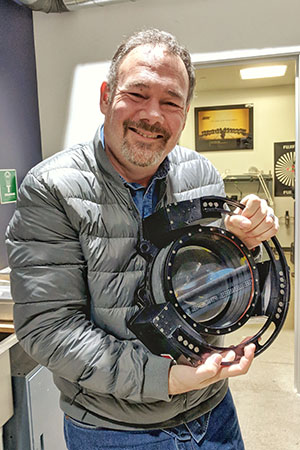 Mike Keesling is an Emmy and Academy award-winning inventor with a deep background in innovation, prototyping and inventing new technologies. During his 40 years of experience, Mike has produced patents in the fields of optics, sensing, motion control and  interfaces for customers in areas as diverse as the entertainment industry, agriculture, aerospace and six branches of the United States armed forces.

Mike’s interests range from electronics and mechanics to model building and photography, with an emphasis on blending technology, art and entertainment to create unique experiences.

Mike has worked most of his life in the motion picture and R&D industries, where he leverages his skills in electronics, mechanics, programming, optics, and robotics. Whether committing years to projects with dozens of team members, or demonstrating ideas in a matter of hours, Mike excels at solving complex problems and has participated in several rapid prototyping events for SOCOM in the past.

Send questions you’d like answered in advance to neworleansgs@asmp.org.