Whose sky is it anyway? U.S. drone case tests rights to air space 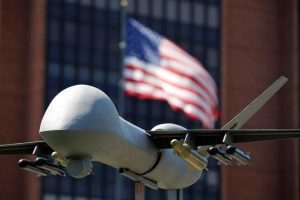 [By© REUTERS/Dominick Reuter/File Photo A model of a military drone is seen in front of an U.S. flag as protesters rally against climate change, ahead of the Democratic National Convention, in Philadelphia ]

[By Paola Totaro and Konstantin Kakaes]

LONDON/WASHINGTON (Thomson Reuters Foundation) – When a small town American roofer took legal action against a neighbour for shooting down his drone, the local dispute sparked a case that could help shape the newest frontier of property rights law – who owns the air.

Drone owner David Boggs filed a claim for declaratory judgment and damages in the Federal Court after his neighbour William Merideth from Hillview in the southern state of Kentucky blasted his $1,800 drone with a shotgun in July last year.

Boggs argued to the District Court in Kentucky that the action was not justified as the drone was not trespassing nor invading anyone’s privacy, while Merideth – who dubs himself the “drone slayer” – said it was over his garden and his daughter.

After a year of counter argument, a decision on which court jurisdiction should hear the complaint is expected within weeks and this could set new precedents for U.S. law.

Experts are watching the case closely as the burgeoning drone industry, fuelled both by hobbyists and commercial operators, highlights the lack of regulation governing lower altitude air space not just in the United States but globally.

“We are in an interesting time now when technology has surpassed the law,” said Boggs’ lawyer, James Mackler, a former Blackhawk pilot and partner at Frost Brown Todd and one of a handful of attorneys specializing in unmanned aircraft law.

“Operators need to know where they can fly and owners must know when they can reasonably expect privacy and be free of prying eyes,” said Mackler whose work involves advising both corporate and government clients planning commercial drone use.

The landmark case comes amid a sharp increase in the global market for drones, or unmanned aerial vehicles, with research firm, Markets and Markets estimating an annual growth rate of 32 percent every year to a $5.6 billion industry by 2020.

The U.S. Federal Aviation Authority (FAA) forecasts about 2.5 million drones will be buzzing in U.S. skies by the end of 2016 – and that number will more than triple by 2020.

But with the global industry surging, all parties, including Merideth, and Boggs’ lawyer, Mackler, agree the use of drones in lower air space urgently needs to be clarified and defined.

“To be honest with you, at the time I did what I did I was reacting as most homeowners would, protecting their property, their kids … I didn’t know who was operating the drone or for what purpose,” Merideth told the Thomson Reuters Foundation.

“In the end, I’m hoping that laws can be put into place to protect not just the home owner but the individual who owns the drone. They have rights too. It is a huge grey area and for now nobody knows what they are allowed to do.”

Mackler estimates about a drone a month is shot down in the United States as residents grapple with the legal confusion about what constitutes their property and their rights.

“What happens typically is that law enforcement doesn’t know what to do and civil suits are uncommon as most people don’t want to get involved due to the costs,” he told the Thomson Reuters Foundation in a telephone interview.

Boggs’ complaint states that the drone was flying at about 200 feet (6o m) above ground level for around two minutes over residential Bullitt County when it was blasted out of the sky.

The height at which the drone was flying is disputed as Merideth insists it was much lower – an integral part of the legal case because higher airspace used by commercial planes is clearly defined in law.

For now, there is no real agreement on who owns the air space below that height and there are also no rules that identify who has the right to say how it can be used.

The court challenge filed by Boggs in January shows Merideth’s defence for downing the drone hinged on his belief it may have been taking video or still images of his daughter.

When Boggs challenged his neighbour, Merideth warned him that not only was he was protecting his family’s rights but he was not to come any further.

Police were called and Merideth was charged with felony, wanton endangerment and criminal mischief but Kentucky District Court Judge Rebecca Ward last October dismissed the criminal charges, saying he “had a right to shoot at the aircraft”.

Boggs’ lawyer Mackler said the case is not about payment for the damaged drone but about carving legally clear boundaries between unregulated lower air space and personal property.

If the case is heard in the District Court, he said, it will not be binding in other federal court jurisdictions but will be influential in other courts. However, if it is appealed and sent to a higher court, it could create a precedent for the country.

Despite the lack of legal clarity over air space, the United States moved to free up the use of small drones on Aug. 30 by relaxing rules requiring drone operators to have a manned pilots licence and specific FAA approval.

These have been replaced with a new class of FAA licence which is much less onerous and less expensive, allowing the use of drones weighing less than 25 kgs for routine educational or commercial use such as power line and antenna inspections.

The rules stopped short of allowing package deliveries, as proposed by Amazon.com Inc, and currently drones can only be used in sight of the operator and not over people.

The FAA expects within a year 600,000 drones will be used commercially – up from 20,000 registered now for commercial use.

This effectively meant that earthly property ownership was deemed to include everything below land to the centre of the earth and upwards in the sky to heaven.

But with the advent of commercial air travel this principle was laid to rest because property owners could not be considered as owners of the air thousands of feet above their homes if air travel was to prosper.

In the United States, the legal principles that emerged over the 20th century focused on nuisance: flights at great heights came to be permitted without regard to the rights of property owners, while low altitude flights, including take-offs and landings, had to factor in the impact on nearby property.

The most important case to define these principles in the United States involved the health of a farmer’s chickens.

Known as the ‘United States versus Causby,’ the challenge unfolded during World War II when noisy military aircraft started flying from the Greensboro-High Point Airfield and over Thomas Causby prosperous chicken farm near in North Carolina.

The constant roar of planes sent Causby’s 400 chickens into a frenzy and they stopped laying eggs, ruining his livelihood.

The farmer sued the Federal Government and both the lower courts and the Supreme Court found in his favour, stating that a landowner “owns at least as much of the space above the ground as he can occupy or use in connection with the land”. This has been a guiding principle of U.S. law for more than 70 years.

By 1958, Federal regulations evolved to clearly define navigable airspace to include everything that was 500 feet or more above ground level, along with “airspace needed to insure safety in take-off and landing of aircraft”.

The “ad coelum”, or to the sky, doctrine, “had no place in the modern world,” wrote Justice William Douglas in his Causby judgment in 1946, arguing there exists “public highway” in the sky which was part of the “public domain”.

Mackler said the current tensions over drones partly derived from the lack of clarity over the legality of their use.

“People have a visceral reaction to seeing a drone. Unmanned aircraft are something different, something they often don’t expect,” he said.

“But if you know that in advance that a drone is being used by your utility company to inspect the safety of the local power lines, you will be less fearful. Law and technology have always had this tension: it takes time, especially if it has to go through the courts. But it will work its way out.”