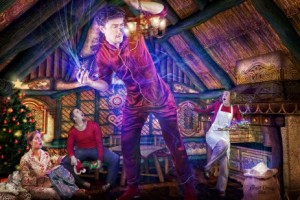 Christopher Winton-Stahle was one of my first students.  He remains one of my best.

We met in August 2003 when Chris was enrolled in the Photographic Business Practices class I taught at Virginia Commonwealth University’s Department of Photography and Film.  It was my first semester teaching at the college level.

Early on that semester, Chris took the initiative to ask that we meet outside of the classroom to talk photography.  We were drawn together by our love of the medium, our common roots in Appalachia and a common sense that by immersing ourselves in the former we could better understand the meaning of the latter.  The conversation that began in a neighborhood bar after a class continued until his untimely passing on November 2, 2016.  I’m a better person for it.

There’s one phrase that I will always hear spoken in Chris’s voice – “Pay it forward.”

Chris believed in giving gifts.  Not giving back, mind you, as in repayment of some sort of cosmic debt, but giving before he had an apparent reason to give.  He gave his time, his talent and his resources to support the people and the communities he believed in, especially the Richmond creative community and the American Society of Media Photographers.

I miss Chris deeply.  I’m reminded of him when I look at my five-year-old daughter.  My relationship with Chris – in particular one moment we shared at the end of our semester together – informed my decision to become a parent.

Chris sat in the second row of the room that night, December 3, 2003.  As I said my goodbyes and thanked the students for allowing me to teach them, conflicting sensations of accomplishment, hope, loss, sadness and trepidation came over me.  I knew that I had prepared the young people in the room for their future as best I could.  But the twenty years that had passed since I had been a young photography student sitting in a university classroom had taught me that in the best and in the worst of ways the world can lead us down paths far different from anything we might imagine.

As I looked out at their faces, a few of the students seemed to share my sense that they were closing an important early chapter in their lives.  And then I saw Chris.  We were both fighting back tears.

That moment was an epiphany for me.

Somehow that moment of unspoken connection made me realize that life – birth, youth, old age and death, those things we normally perceive as a linear progression through, and often a race against, time – is actually a backwards and forwards and up and down and to and fro swirling that is much more like the rhythm of a dance than it is anything with a literal beginning, middle, and end.

This Life Dance is holy.  It is a sacrament in which the universe invites us to partake.  We are each called to join the Dance in a way that is both uniquely personal yet common to all humanity.  By answering this call in the affirmative we fragile humans have developed rituals, formed cultures, pushed the envelope of scientific exploration and made music.  And, as Chris did so well, we have created art.

We answer the call of the Dance in the affirmative when we choose action over hesitation, community over solitude, vulnerability over security.

That night I realized that to fully participate in the Life Dance I needed to choose faith over fear, and risk becoming a father.  Christopher Winton-Stahle gave me ears to hear that call.

I will always be grateful to Chris for that gift.  I will never forget him.  I will try to always honor his memory by affirmatively answering the call to join in the Dance.