The Life and Legacy of Photographer Ted Polumbaum

Join Ted’s daughter, Judy, and photographer Lou Jones for a conversation – with pictures! – about the remarkable life and important work of an ASMP stalwart who was both of and ahead of his times. Ted Polumbaum (1924-2001), a Boston-based freelancer for LIFE magazine and many other publications, joined ASMP in 1958 (when M still stood for Magazine). A staunch advocate for creative rights and fair compensation (although a soft touch for good causes), Ted was a widely admired colleague (too nice to inspire envy), mentor to many younger photographers, social activist, goofball and punster, and all-around good guy. Lou Jones, another ASMP icon, former New England chapter President, and National Board Member, knew Ted well.

Twenty years since Ted’s death, his daughter Judy has completed a new book about his personal and professional story and the tumultuous times in which he lived and worked – All Available Light: The Life and Legacy of Photographer Ted Polumbaum (McFarland Press, 2001). Through the month of October, the publisher is offering a 30 percent discount on copies purchased through its website; use the code POLUMBAUM30 at checkout from this link:

Ted became a photographer inadvertently. As with many in that storied Greatest Generation, he’d gone off to World War II and returned to finish college on the GI Bill. He was working for United Press in Boston when the U.S. House Committee on Un-American Activities derailed his news-writing career. Fingered for his membership in a progressive student group in college and summoned to Washington DC to testify at hearings on “Communist subversion in education,” Ted defied the Congressional inquisitors and suffered the usual consequences – he was fired, blacklisted, and trailed (for four decades!) by the FBI.

Married with a toddler (daughter Miki) and another child on the way (Judy was in the womb), Ted sought a new line of work via his childhood hobby, photography. Soon he was shooting for LIFE; publishing mogul Henry Luce had spurned the blacklist and empowered his editors to hire the finest talent money could buy. Ted became a stringer for the entire Time Inc. roster and a regular for many other publications. He also was a gentle but committed political activist, following and supporting the era’s great movements for social justice. He covered Freedom Summer for Time and, both on and off the job, documented protests against the Vietnam War before protest photography was a thing. He and his wife, Nyna Brael Polumbaum, chronicled Chile’s soaring hopes during the Allende years, and dreams dashed by the U.S.-backed coup of Sept. 11, 1973, in the book Today is Not Like Yesterday: A Chilean Journey, published after the country’s return to democracy.

When the heyday of the great picture magazines had passed, Ted took on commercial jobs (he called it “corporate propaganda”), which supported his true passion, documentary photography. He continued to work on books and exhibitions until falling ill with the mysterious brain ailment that ended his life. But the historic images he captured across the country and around the world – India, Southeast Asia, Latin America, China – endure for posterity. Ted’s archives constitute the largest collection by any individual photographer in the holdings of the Newseum, a division of the Freedom Forum, which remains in business, with online programs and traveling exhibits, despite the closing of its grand museum of news on the National Mall at the end of 2019.

Judy Polumbaum, Ted’s Boston-born middle child, is an unrepentant former newspaper reporter, longtime educator and author, specialist on Chinese media, and University of Iowa professor emerita of journalism and mass communication. After extended periods on East and West coasts, in the Midwest and in China, she now lives and writes on the outskirts of Las Vegas, with visits to New England whenever possible. Although her photography career peaked in high school, she has joined ASMP in honor of her father, with New England her home chapter.

Lou Jones, longtime ASMP member and former New England chapter president and national board member, is a Boston-based award-winning photographer who specializes in advertising and corporate photography and location shoots all over the world. In a career spanning every format, film type, artistic movement and technological change, he has photographed for Fortune 500 corporations, international companies and local small businesses; completed assignments for major magazines and publishers worldwide; pursued long-term projects on civil wars in Central America, death row, the Olympic Games, pregnancy, construction work, and the countries and cultures of Africa; and published numerous books. He has been recognized by Nikon as a “Legend Behind the Lens,” honored by Lowepro as a “Champion,” and identified as an ASMP “Master.”

THIS IS A VIRTUAL EVENT

To register for the event, and receive the Zoom information, please follow this link: 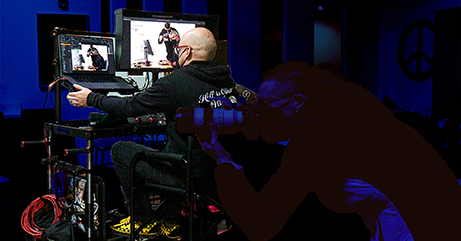