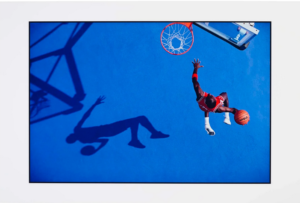 The third sports-related Christie’s sale is called “The Athlete: Photographs by Walter Iooss Jr.” It features 38 images by the noted sports photographer of Jordan (including two of him mid-slam-dunk), Shaquille O’Neal (complete with his size 22 footprint stamped on the photograph in ink), Kevin Garnett, Joe Namath, Joe Montana, the late Kobe Bryant (who died in a helicopter crash in January of this year), and more athletes. The pictures date back to the 1960s, when Iooss began shooting sporting events. He would eventually become a go-to photographer in sports, shooting both action shots and intimate portraits. In the press release about the sale, Jordan sings his praises: “From what I can tell, Walter has never taken a bad shot of anybody or anything. Years later, working together on Rare Air, we had become so comfortable around one another that I barely had to look up. You don’t have to perform for Walter.”