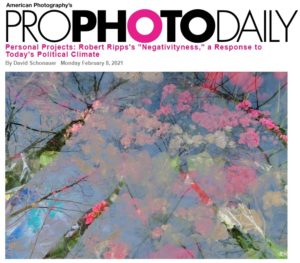 Editor’s Note: Robert Ripps is an ASMP Professional Member out of the New York Chapter.

What can trees tell us about today’s America?

A few years back, Ripps was working on a series that, as he puts it, “examined how urban trees survive, how their environment shapes them and in return, how they shape their environment.” The work was put on hold when Ripps began caring for a close friend who was diagnosed with pancreatic cancer. Then came the election of 2016.

“It seemed that America had started to change — night became day, lies became ‘truth,’ what was normal became insane,” he says. “All familiarity seemed to disappear, and to me, it seemed we were in a negative universe.”

And then he made a mistake while working on a tree image.

“I accidentally inverted the colors, and I liked what I saw,” says Ripps. “Somehow it seemed to sum up what I was feeling and seeing around me. I started to invert the tree images I was shooting, which often gave otherworldly results. After a while, I also started to change the colors by altering the way the RAW images were processed to further alienate the scenes. I was never one to manipulate my images in Photoshop, being more of a purist, so this was a complete change for me. I tried to do things in Photoshop that I had no idea what I was doing, kind of like I was purposely trying to break something.”