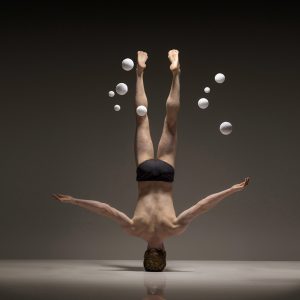 Legendary photographer, Lois Greenfield, has created a body of remarkable images that stop dancers in flight. As she has written, “The ostensible subject of my photographs may be motion, but the subtext is time. A dancer’s movements illustrate the passage of time, giving it a substance, materiality and space. In my photographs, time is stopped, a split second becomes an eternity and an ephemeral moment is solid as sculpture.”

On November 1st, Lois Greenfield joined in conversation with Paul Galando, President of Dance Films Association and Founding Director of Dance and New Media at New York University’s Tisch School of the Arts, in which they discussed her new body of work as well as the inspiration, methods, and approaches that have motivated the creation of her groundbreaking images.

Writing about Greenfield’s recent book, Moving Still: Lois Greenfield, in the Washington Post, Sarah L. Kaufman said “In the most intriguing, secretive pictures, it’s as if we’re watching the dancers dream. We’re seeing that moment when the dream whips them around and spins right out of them, and in our minds, perhaps, we catch a little of how that feels.”

Beginning her career as a photojournalist, Greenfield covered the experimental dance scene for the Village Voice from 1973 to the mid 1990’s. In 1982 she decided to open her own studio where she could control the lighting and work with dancers in a collaborative environment. Greenfield has created signature images for countless contemporary dance companies as well as commercial clients, including Adidas, AT&T, Disney,  Rolex, Sony, and Epson. Her photographs have been featured in such magazines as The New York Times Magazine, Time, andVanity Fair, and since her first show at New York City’s International Center of Photography in 1992, her work has been exhibited in many museums and galleries, such as the Tel Aviv Art Museum, Israel; the Venice Biennale, Italy; the Musée de l’Elysée, Switzerland; the Erarta Contemporary Art Museum, Russia; and the Southeast Museum of Photography, Florida.

Since 2014 Greenfield has been an Artist in Residence at NYU/Tisch Department of Dance and New Media. In 2015, She was honored with the Dance in Focus award in recognition of her ground-breaking contributions to the field. Her third book, Lois Greenfield: Moving Still, (Thames & Hudson, UK & Chronicle Books, USA) was released in Fall 2015.

The program is organized by The American Society of Media Photographers New York in collaboration with the Parsons School of Design at The New School.  With support from Epson America.