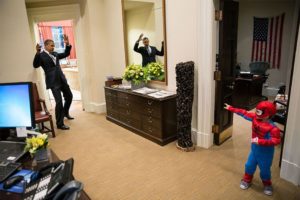 Cross-posted from Fstoppers
[by Alex Cooke]

Pete Souza needs little introduction. As the Chief Official White House Photographer for two presidents, Souza had the crucial duty of documenting innumerably many historical moments, a job he did with an empathetic touch that has made his work the model for many aspiring photographers. I recently had the chance to speak with Souza about his work, his approach, and his new film.

As Chief Official White House Photographer for both President Ronald Reagan and President Barack Obama, Pete Souza has been witness to countless moments in history and has documented them in a way that uniquely humanizes his subjects and shows remarkable creative range. Now, he is the subject of “The Way I See It,” a moving documentary directed and produced by Dawn Porter that follows Souza’s life as a photographer and how his images captured history that helps to explain the current state of American politics and society. The film also follows Souza’s own personal arc that brought him to a place where he uses his work and powerful voice to comment on the issues facing American people.

Related: Watch the “The Way I See It” Official Trailer below: