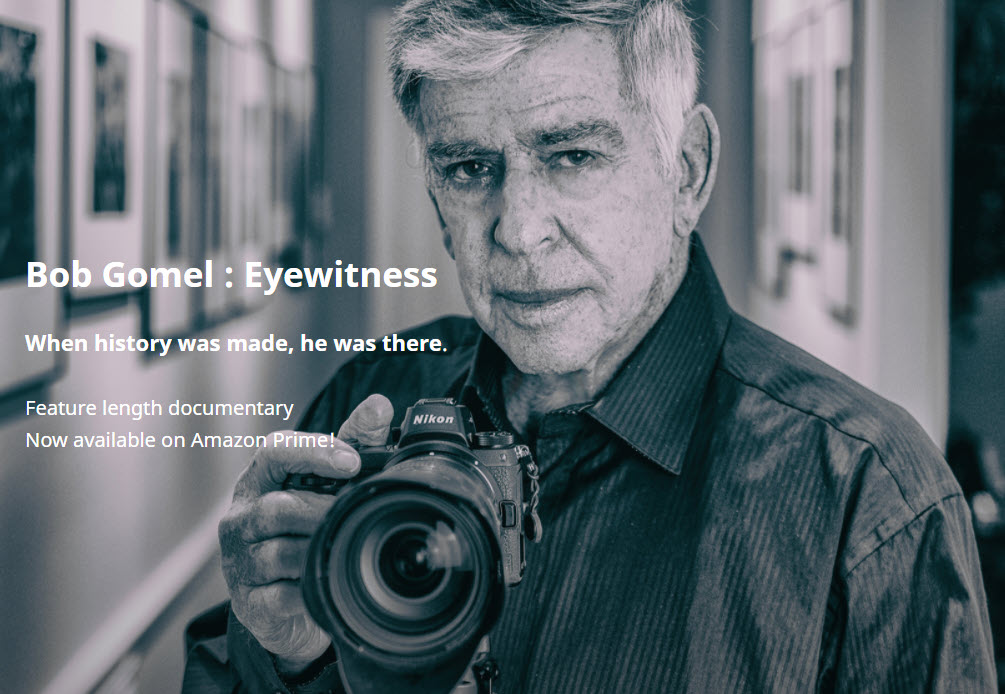 Cross-posted from BobGomelEyewitness.com and Amazon Prime.

The headline in a recent Albuquerque Journal article read: “Bob Gomel’s Photographs Compel Even after 40 Years.” The renowned LIFE photographer has documented many of the great moments and personalities of contemporary history. Articles and books have chronicled Bob’s adventures, including Art Buckwald’s “Leaving Home”, Yoko Ono’s “Memories of John Lennon”, “Arnold Palmer: A Personal Journey,” “Malcolm X”, by Thulani Davis, Dick Stolley’s “Our Century in Pictures”. His work is exhibited at The Monroe Gallery, Santa Fe and the Jackson Fine Art Gallery, Atlanta.

Bob was a LIFE Magazine photographer in the ’60s, and had numerous covers; he has a photo of Malcolm X taking a photo of Cassius Clay at a lunch counter that is in The Smithsonian; he played football with JFK at Hyannis Port while covering him for goodness sakes!

His LIFE cover of Eisenhower’s casket lying in state, shot remotely from the Capitol dome, is a classic.

He has been an ASMP member for 57 years, that has got to be close to, if not THE, oldest membership going. He founded the Houston Chapter, and, for better or worse, signed off on me for professional membership in 1979.

My wife Sharon always refers to him as ‘The most interesting man in the world.”

And now a documentary on Bob entitled Bob Gomel: Eyewitness has just dropped to Amazon Prime!

Read more about the project with David Scarborough.

View the Bob Gomel Photos at the Monroe Gallery.