Funding Like a Pro: A Blueprint for a Passion Project

By Trisha BarberJanuary 25, 2017February 1st, 2017Like a Pro, Strictly Business Blog
No Comments 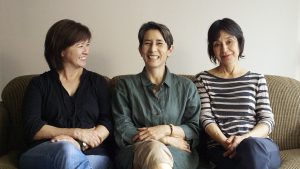 ASMP member Karen Kasmauski grew up at a time when the term “tiger mom” was still unfamiliar. She’s a filmmaker, photographer, project manager and educator who has had her work published by prestigious organizations such as National Geographic and the BBC. Karen’s website is a great reflection of her body of work but the story of how she has developed and funded her passion project about Japanese war brides is what we found worth sharing with other ASMP members.

It’s a passion project for Karen because learning about her mother’s journey was important to understanding her upbringing. As the oldest child in her family Karen felt a need to figure out what drove her mother to leave her Japanese family, marry an American soldier she didn’t know well and move to an unfamiliar country. She was trying to reconcile the differences she noticed between her upbringing and that of her American friends’. One might also call it a passion project because she started it without the pretext of making money. Everything she and her collaborators have made to date has been plowed right back into the project.

Karen and collaborators Kathryn Tolbert and Lucy Craft don’t believe the project has reached its logical conclusion yet. They, and others who have seen the work, think it has great relevance to the cultural issues we are currently facing as a country. “Based on the response we’ve been getting, this seems to be the right time to tell this story and that keeps us going. We almost need a therapist in the room when we talk about this project. It becomes so emotional and relevant to what is going on today with other cultural groups” says Karen.

She began exploring this project during a natural lull in her freelance career. “I came from a situation where my mother was kind of ugly toward me but at the same time I was so curious about how my mother came to make the courageous choices she did” says Karen. She was approached by Lucy Craft who was in the process of filming her mother and asking similar questions. They decided to take the opportunity to combine flexing their professional muscles with exploring answers to family questions. It wasn’t long before they got Kathryn Tolbert involved. It has become a cathartic project for the three collaborators who also see the educational and historical benefits of getting the story out.

The collaborators struggled for a year to get the project going and they finally ended up seeking some help from Rob Finch now with Blue Chalk Media in Brooklyn, NY. They decided their first step was to create a five-minute film to clarify their idea and help them pitch it. But they still needed funding. Rob agreed to create a two-minute film that would become the basis of a Kickstarter campaign designed fund the next phase. They were thrilled to see their Kickstarter campaign raise around $30,000 and thankful for additional private donations that finally gave them what they needed to start pitching the project. It was licensed by the BBC and seen around the world. The trailer for Fall Seven Times, Get Up Eight is available on Vimeo. The Untold Story of Japanese War Brides was also picked up by The Washington Post in the fall of 2016.

“This will end up being a $500k project if we do everything we want to do. We aren’t the type of people who know how to access that kind of money but each step has been rewarding in so many ways. We just want to get this untold story out”. says Karen.

Bringing YOUR Passion to Life

Often the path to bringing a project to life is about taking baby steps. Here’s Karen’s advice to get your passion project started.

This article is part of a series featuring ASMP members who are doing cool things and have something to share. Search for other articles in this series by using search term “Like a Pro” on the ASMP site.