Watch the Free Introductory Course:
Is UAV Photography Right for You? 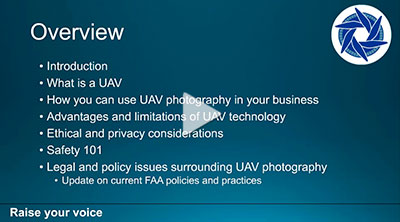 This series has ended. If you registered for the live event and have not received access to the exercises and recordings, please email Judy Herrmann, herrmann@asmp.org. If you would like to be notified when we launch our next e-learning series, join our mailing list. 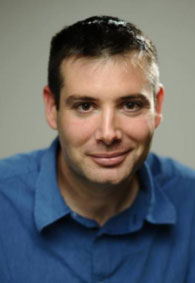 Parker Gyokeres of Propellerheads Aerial Photography is an award winning U.S. Air Force photojournalist with 22 years of worldwide expeditionary experience, including three deployments to Afghanistan and one to Iraq. He is represented by Legion Photo. As a remote control pilot and custom UAV builder, he has ten years experience with the design, construction and operation of both multicopters and fixed-wing aircraft. An advocate and educator on the safe and responsible use of small UAVs for aerial photography, he serves on the board of directors for the Professional Society of Drone Journalists.

Gyokeres has been featured as a spokesman for commercial S-UAS safety by CNN, the New York Times, The Washington Post, Associated Press, Scripps News Service and others. 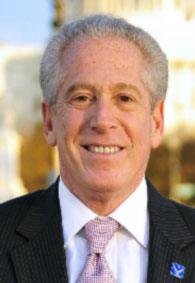 Mickey Osterreicher is the general counsel for the National Press Photographers Association. A staunch defender of First Amendment rights for all photographers, he has taken a leading role in a multi-association effort to get the FAA to permit the use of drones for newsgathering.