By ASMP February 7, 2018 Diversity in Photography
No Comments 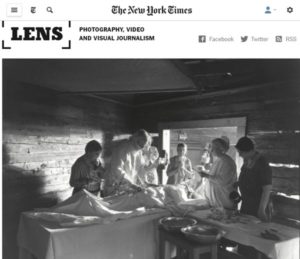 Cross-posted from Lens
[by Rena Silverman]

In 1904, a photographer in North Carolina lent a 4×5 camera to a divorced single mother. He shook his head and muttered several times that she’d “never make the grade.” One year later, he viewed her as his competitor and took back his equipment. So, Bayard (pronounced BY-ard) Wootten, who until then had supported her family by selling small paintings and drawings, went out and bought her own camera.

“She made more than a million images in her life,” said Anthony Lilly, who has written a biopic of Ms. Wootten using her old typewriter. “She illustrated six books with her photography. Most of the government buildings in North and South Carolina used her wall mural photography. It was pictorial photography.”