Words at the Window: Social Isolation and the Coronavirus in Brooklyn 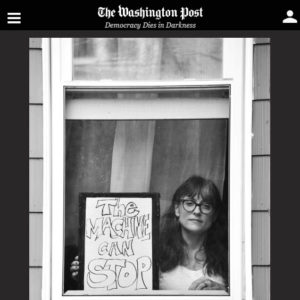 Cross-posted from In Sight
[by Kenneth Dickerman and Stephen Lovekin]

Around the globe, the novel coronavirus is affecting millions of people. In Italy, more than 8,000 people have lost their lives. In the United States, the related disease, covid-19, has killed people in at least 42 states. As of late Thursday, the U.S. death toll topped 1,100, with New York seeing the highest number of deaths.

By now, most of us are familiar with the images of empty streets. While that is happening, people around the globe have also made efforts to seek unity through gestures such as singing or exercising together from balconies. It is heartening to see how people are finding something positive to hold on to.

Stephen Lovekin, a staff photographer with Shutterstock in New York City, has been documenting a similar effort in Brooklyn. He has reached out to families in the Ditmas Park neighborhood who are self-isolating and asked them what messages they would like to share with the world. The result is a portrait series of families with signs of inspiration and hope.