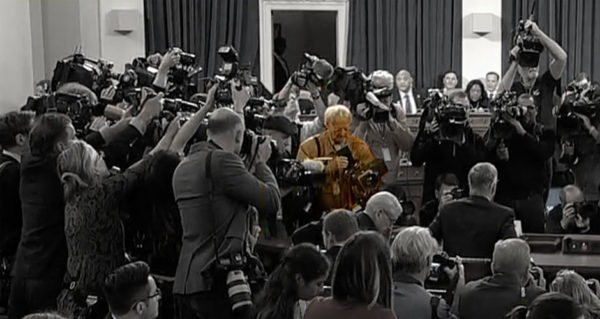 Cross-posted from PDNPulse
[by Holly Hughes]

Photojournalist David Burnett and his old wooden camera drew a lot of attention and curiosity when he began photographing at the start of Wednesday’s first public impeachment hearing. The feed of every TV network showed Burnett loading and unloading sheet film, and peering into his viewfinder to photograph the two witnesses, George Kent and William Tayor. “Shooting large-format today was a reminder that even though I have many frames per second with my Sony a6500, I’m still shooting film one solitary, isolated frame at a time. In a world of 10 or 20 fps, two frames in 30 seconds is a big deal,” Burnett tells PDN. While his press colleagues were firing fast, Burnett says, “I shot 16 frames today.”