What We Learned This Week: World Press Photo Accused of ‘Structural Racism’

By ASMPAugust 7, 2020Current News
No Comments 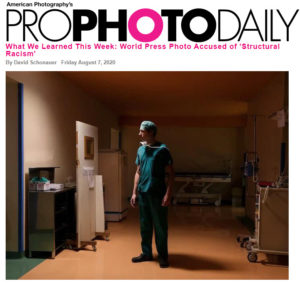 The photo industry continues coming to grips with issues of diversity.

This week The Art Newspaper reported that World Press Photo, the Amsterdam-based photojournalism organization, has been accused by working photographers of “structural racism” and “performative gestures” after the announcement of a new managing director focused attention on the organization’s all-white supervisory board.

On June 11, World Press Photo announced the appointment of Arnoud van Dommele as its new managing director. He replaces the long-serving Lars Boering. Along with the announcement was a picture of the organization’s supervisory board, whose members are all white.

Nana Kofi Acquah, an assignment photographer for Getty Images and a World Press Photo Competition Jury Member in 2019, said on Twitter: “Many don’t understand what institutional racism is, but this is exactly what it looks like.”

In a statement, the organization stated its core values are “accuracy, diversity, and transparency” along with “a broader approach for connecting the world to the stories that matter, required for the changed world that has presented itself in recent months.”