What We Learned This Week: With Violence Against the Media On Rise, Learn to Stay Safe 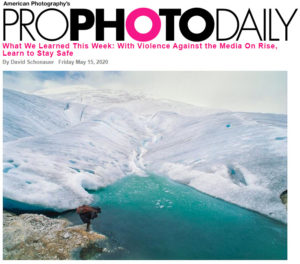 Violence towards the media is on the rise.

This week we spotlighted an article from Chris Post, chair of the National Press Photographers Association’s Safety & Security Committee, offering advice on staying safe while covering news in public.

Tensions are high, “and the constant pummeling of the ‘Fake News’ mantra doesn’t help calm the already turbulent situation,” noted Post, who cited a number of recent incidents in which visual journalists were assaulted (and in one case robbed) while working.

One of those incidents involved a television journalist in the Quad Cities on the Iowa-Illinois border, who was assaulted while shooting video footage of local businesses. Fstoppers later reported that a man was charged for battery and criminal damage in assault. The man grabbed the journalist’s camera, raised it above his head and smashed it on the ground, then approached the journalist menacingly, at which point it appears the photographer disengaged and ran to safety. According to Fstoppers, the man was “upset that he had appeared in the shot when driving by.”