What We Learned This Week: SCOTUS Rules States Cannot be Sued for Copyright Infringement 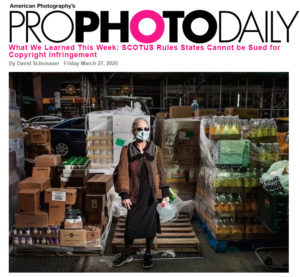 Coronavirus wasn’t the only photo news this week.

On Tuesday we learned that the US Supreme Court ruled that a videographer who spent two decades documenting the salvaging of Blackbeard’s pirate ship cannot sue the state of North Carolina in federal court for using his videos without his permission.

The ruling was a victory for states claiming immunity from copyright infringement lawsuits, noted NPR, and, added The Art Newspaper, a blow to artists, particularly photographers and writers whose images and words may be used by state government offices, such as tourist bureaus.

The case had its beginnings with the 1996 discovery of the sunken remains of a French slave ship captured by the infamous pirate Blackbeard in 1717, and renamed by him The Queen Anne’s Revenge. The vessel eventually sank off the coast of North Carolina, and under federal and state law, the discovered remains belonged to the state, noted NPR. North Carolina hired a salvage company for a recovery operation, and that company hired videographer Frederick Allen to document the work, which he did for two decades — “all the while,” added NPR, “copyrighting his work so that it could not be used without his permission.”