What We Learned This Week: Remembering Dan Budnik, Photographer of Civil Rights Movement and More 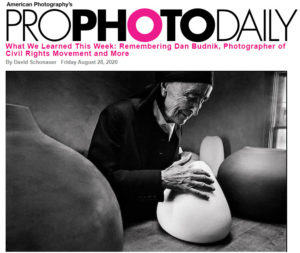 Editor’s Note: Dan Budnik was and ASMP Member and was awarded the American Society of Media Photographers Honor Award in 1999.

Budnik, who documented artists at work during the 1950s, key events of the civil rights movement, Native Americans in the Southwest and more, died on August 14 at an assisted living residence in Tucson, Arizona. He was 87. His work, noted The New York Times, was published in leading magazines of the day, including Life and Look, and collected in several books, including Marching to the Freedom Dream, which featured his pictures from three significant civil rights moments: the 1958 Youth March for Integrated Schools, the 1963 March on Washington for Jobs and Freedom and the protest march from Selma to Montgomery, Alabama., in 1965.

Budnik was known for his striking portraits of Dr. Martin Luther King Jr. taken just moments after his “I Have a Dream” speech at the March on Washington, noted USA Today. Time magazine chose one of Budnik’s portraits of King for its “I Have a Dream” 50th anniversary issue in 2013. At the March on Washington, Budnik took a position behind Dr. King as he addressed the enormous crowd from the steps of the Lincoln Memorial, added The Times.

“I knew everyone else would be photographing him from the front and the sides,” Budnik said in an interview in Marching to the Freedom Dream. “But I’m about six steps above him, knowing he had to exit in reverse and go up the steps to where I was.”

Related: Dan Budnik, Who Photographed History, Is Dead at 87