What We Learned This Week: Photographer Partially Blinded at Protest Speaks Out — and Sues 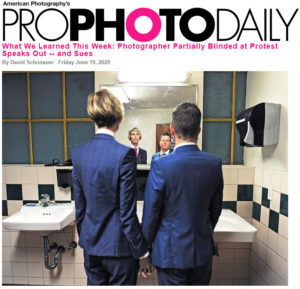 And the evidence that Linda Tirado documented last month while covering protests in Minneapolis following the death of George Floyd will be used in a lawsuit that she has filed against the city and its police department. Tirado was partially blinded when she was hit in the face by a foam bullet. The final photo she took before that happened shows what appears to be a police officer aiming a foam bullet gun right at her. “There’s no way that they could have mistaken me — with a professional camera — for anything but working press,” she told CNN.

“There were protesters behind me, police in front of me, but you can see from the clarity of the photo that there wasn’t gas around us,” Tirado said.

Tirado filed her lawsuit last week in U.S. District Court, noted the Minneapolis Star Tribune. The suit names as defendants the city of Minneapolis and its police chief, Medaria Arradondo, among others, including “John Does 1-4” — referring to unidentified officers she alleges played a role in her injury.