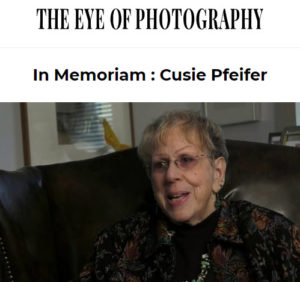 “Cusie Pfeifer devoted her whole life to the recognition of photography as an art form. In 1976, she opened the very first gallery entirely devoted to photography in New York, located on Madison Avenue. She defended artists like Sally Mann and Peter Hujar. She was the first president of the Association of International Photography Art Dealers (AIPAD).”

“Catherine Edelamnn pays tribute to her:

‘Last night I received an email from Anne Tucker letting me know that Cusie Pfeifer passed away last Friday from complications due to Covid-19. For those that did not know her, she was a force within our photo world, the first president of AIPAD, and someone who did not mince words. I remember being unbearably nervous the first time I walked into her gallery to meet her. Her reputation was enormous, as was her distaste for anything but the truth. A few months, or maybe years later, we were sitting in her gallery and out of nowhere she said I could call her Cusie… I remember feeling like I had been admitted into a secret club.’”