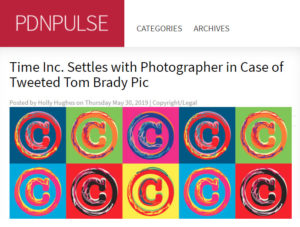 Cross-posted from PDNPulse
[by Holly Hughes]

Photographer Justin Goldman has reached a settlement with Time Inc., one of the nine defendants in a copyright infringement case involving the common practice of publications “embedding” Tweets in articles. The settlement effectively ends any further appeals in the case, which has implications for how publishers share and display copyrighted images hosted on social media servers and other websites.

In 2017, Goldman sued Time, The Boston Globe and other online publishers after they embedded into news articles a viral Tweet showing Goldman’s photo of New England quarterback Tom Brady. Goldman said the unauthorized use violated his exclusive right of display under the copyright law. The publishers cited the so-called “Server Test,” saying that because the image resided on a third-party server, they had not infringed Goldman’s copyright. The “Server Test” stems from a 2007 decision in the Ninth Circuit court of appeals over the display of thumbnail images in Google.