The Story of the Elian Gonzalez Photo

By ASMPJuly 9, 2020Current News
No Comments 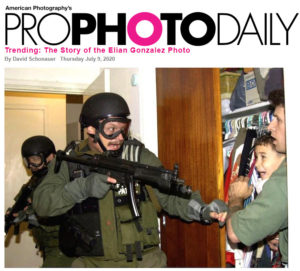 Who is Elian Gonzalez?

And why was it news when, on Father’s Day, he announced that he was set to become a father?

“Soon I will begin to understand what it means to be a father,” Elian Gonzalez wrote on his Facebook page, notes CNN. “But what I know up until now is my father and I hope to do it as half as well as he did with me.”

Twenty years ago, Gonzalez became a news sensation as the protagonist at the center of a custody case that sparked diplomatic and tensions between the United States and Cuba. The story found its emotional focus in one of the most famous news images of the era: The Pulitzer Prize-winning photo, by AP photographer Alan Diaz, showed a terrified 6-year-old Gonzalez hiding in a closet with his father as armed federal agents burst in.