By ASMPJuly 23, 2020Current News
No Comments 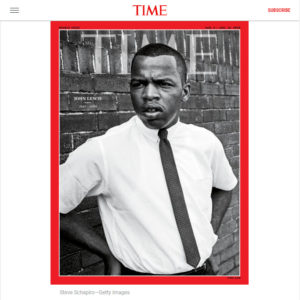 Cross-posted from TIME
[by Olivia B. Waxman]

“In 1963, Steve Schapiro, then 28, was on assignment for LIFE magazine, photographing prominent civil rights activists, from James Baldwin to Fannie Lou Hamer. One day, while following Jerome Smith, a participant in the Freedom Rides that raised awareness of interstate bus segregation, he went to Clarksdale, Miss., to document one of the many training sessions that were taking place in church basements across the South. In those meetings, volunteers studied how to react to the racism they would encounter in their work. That day in Clarksdale, as Schapiro watched a line of ministers file into the church, he noticed among the group another well-known Freedom Rider, in a tie and button-down shirt: John Lewis. He asked Lewis if he could take his photo, and the young man agreed.

Weeks later, Lewis would become the youngest person on the speakers’ slate at the March on Washington for Jobs and Freedom, addressing some 250,000 people from the Lincoln Memorial as the chairperson of the student arm of the 1960s civil rights movement, the Student Nonviolent Coordinating Committee (SNCC). Lewis, then 23, went on to represent Atlanta in Congress for three decades until July 17, when he died at the age of 80 after a battle with cancer. The picture Schapiro shot more than half a century ago is featured on the cover of the Aug. 3-10 issue of TIME, which dives into Lewis’s life, career and legacy.”