The Camera’s Role in Documenting a Critical Social Movement 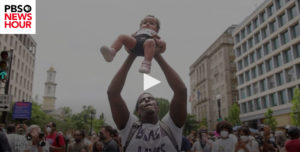 Cross-posted from The PBS NewsHour and The New Yorker Photo Booth. [By Jeffrey Brown and Lena Jackson, and by Rachel Riederer, photos by Mark Clennon]

“Today, cameras are almost ubiquitous on mobile phones, and anyone can be a photographer. In this new technological landscape, millions of lenses are focused on the major events of a tumultuous period. For this Race Matters report, Jeffrey Brown looks at the power of the camera to shape and shift public perceptions — now and in the past.”

“Thirty-two-year-old Mark Clennon is a professional photographer who first gained a following on Instagram. In recent days, he’s been taking part in and photographing protests in New York.”

You go, you break down, you open up a camera — it’s a series of lenses and mirrors. It’s my job to just show a mirror to America, what it looks like right now, and, really, as the holder of that mirror, be as accurate as I can, and really show that this is more than just a protester. These are real people. These are real humans, real stories.”

The camera’s role in documenting a critical social movement

Scenes from the George Floyd Memorial in Brooklyn