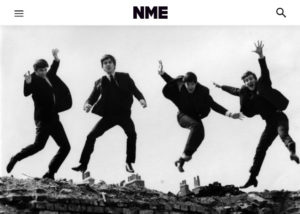 Cross-posted from NME
[by Nick Reilly]

Fiona Adams, the photographer behind some of the most recognisable snaps of The Beatles, has died at the age of 84.

Adams, who became of the band’s most frequently used photographers, is best known for the memorable shot of the Fab Four jumping off a Brick Wall on London’s Euston Road.

It famously adorned the cover of 1963’s ‘Twist And Shout’ – the group’s first UK EP.