The Afterlife of George Floyd: A Portfolio by Photographer Eli Reed 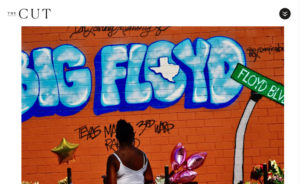 It is a beautiful symmetry to have Eli Reed’s photographs capture and canonize this American chapter and George Floyd’s funeral. Reed is one of the best living photographers and is walking history himself; he is the first Black photographer to join Magnum Photos and is a member of Kamoinge, the Black photography collective that has in its DNA Roy DeCarava, a founding father of black-and-white fine photography.

The images are something, as they say down South, perhaps even more so because George Floyd is so present and absent from them. Where is he? It’s just as well that Floyd be in absentia, in a sense, from a photo series about him. Find George Floyd, the human, the person who unsuspectingly became a symbol, the father, the man who called out for his mother as he lay dying.