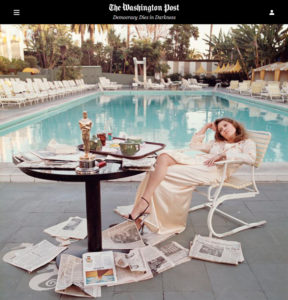 The morning after Faye Dunaway won the best actress Oscar for “Network,” she woke at 6 a.m. to meet photographer Terry O’Neill at the pool of the Beverly Hills Hotel.

They had hit it off a few days earlier, at a People magazine photo shoot in March 1977, leading Mr. O’Neill to suggest his idea for a carefully staged sunrise photograph — a snapshot of Dunaway sitting alone in a pool chair, gazing at her Academy Award with a look that suggested the hollowness of success, or the years of hard work that had culminated in her first Oscar, or perhaps just the difficulty of facing a new day in Hollywood on three hours’ sleep.

See additional articles and photos from The New York Times, BBC, The Eye of Photography, Artlyst, and The Guardian.