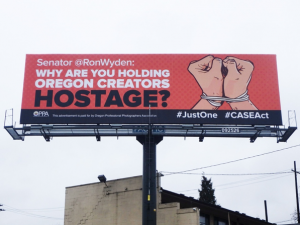 The CASE Act is a bipartisan copyright dispute resolution bill that is inches away from becoming the law of the land. Unfortunately, though, it has stalled in the Senate due to just one Senator. The bill calls for a “small claims” process staffed by U.S. Copyright Office attorneys for a limited category of infringement claims by creators, as well as an opportunity for a quick and inexpensive resolution by users of its various defenses to copyright infringement, such as fair use. The bill is an alternative approach to the one-size-fits-few federal copyright litigation that is far too expensive and complicated for working creators to utilize.

The CASE Act has been analyzed and debated for over 10 years (see backgrounder), and has already passed the House of Representatives by a vote of 410-6. The Senate version (S. 1273) was reported out of the Senate Judiciary Committee unanimously and is co-authored by Senators Dick Durbin (D-IL) and John Kennedy (R-LA), leaders from both sides of the aisle, who remain committed to the importance and value of this legislation.