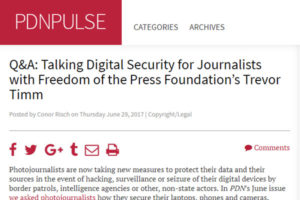 Conor Risch sits down with FPF’s executive director Trevor Timm for a Q&A about how to protect journalists from digital security threats they may be facing.

Photojournalists are now taking new measures to protect their data and their sources in the event of hacking, surveillance or seizure of their digital devices by border patrols, intelligence agencies or other, non-state actors. In PDN’s June issue we asked photojournalists how they secure their laptops, phones and cameras.

The Freedom of the Press Foundation (FPF) was one resource recommended by Ed Ou, a Canadian photojournalist who was denied entry into the U.S. last year and had his devices seized by U.S. Customs and Border Patrol agents.

Read the rest at PDNPulse.