Photographing the Mob on Capitol Hill 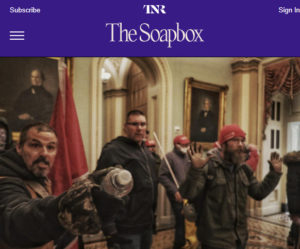 NPPA (National Press Photographers Association) has posted a statement about photographing the “mob” on Capitol Hill by several photojournalists, along with links to interviews with them.  And, Ron Haviv, who once covered a coup attempt in Panama, followed rioters through a broken window into the seat of his own nation’s legislative branch.

For more than three decades, photojournalist Ron Haviv has covered wars and unrest across five continents. One of his first international assignments was covering the 1989 coup attempt in Panama.* So when he watched President Trump order his fever-pitch mob of supporters to ‘walk down to the Capitol’ on Wednesday to somehow correct the “egregious assault on our democracy” involved in counting and certifying votes, Haviv could gauge better than most what might happen next.

‘I kind of did imagine that if everything went wrong, I could see them getting into the Capitol,’ he told me by phone Wednesday evening. ‘But I didn’t see it being as easy as it turned out to be. Why would you think that? It just seems ridiculous. This is the United States government.’”

Attacks at the Capitol are Attacks on Democracy

A War Photographer Embeds With the Capitol Hill Mob

He Was Assigned to Photograph a Joint Session of Congress. The MAGA Mob Had Other Plans

INSIDE THE U. S. INSURRECTION WITH A NAT GEO PHOTOGRAPHER