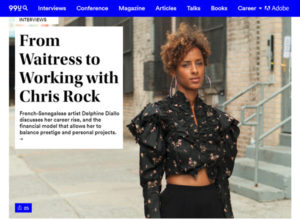 Editor’s Note: An interview with photographer Delphine Diallo about how she has made the most of her chance encounters.

Cross-posted from 99U.com
[by Jacqueline Lara]

French-Senegalese photographer Delphine Diallo lives for life’s surprises. Little did she know, a chance meeting in Paris with famed photographer Peter Beard, who is known for his African wildlife shots, would come full circle, and he would become her mentor. In February 2008, Diallo received a call from Beard, and he asked, “What are you doing in April? Please come to Botswana with me to be my assistant on the Pirelli calendar.”

Diallo said yes, and the transformational trip solidified that photography was her calling. She later moved to New York, quit her full-time agency job, started waitressing, and moonlighted as a photographer. Randomly bumping into a lost Chris Rock in her Brooklyn neighbor led to photographing Rock for a recent comedy tour and resulted in a huge career breakthrough. Clients have been coming ever since, including The New York Times, Nike, and Swizz Beats.