By ASMPJuly 1, 2020Current News
No Comments 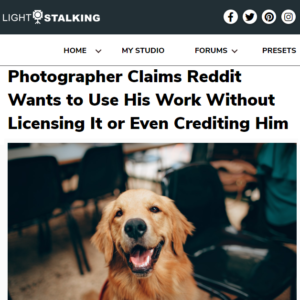 Photo by Helena Lopes from Pexels

Photographer John Wingfield of Bellingham, Washington is telling the world about his recent experience with Reddit, one of the largest websites out there — and it is another reminder of how vigilant you have to be about your rights when it comes to your photography.

Thankfully, no one has stolen anything in this case. We cover way too many stories about that, and they’re always depressing (plus they have the added bonus of following the same script).

Wingfield uploaded a picture of his golden retriever to the Reddit /aww and, unsurprisingly, received a ton of attention for it. The dog isn’t just cute — Millie is a celebrity in her own right. With a huge following on Instagram, it’s no wonder that a particularly precious pic of Wingfield’s golden retriever made a splash on Reddit.

But what happened after that shocked him, and he has screenshots as proof.