Petition Goes Viral: Do Not Replace Disney Photographers With Robots 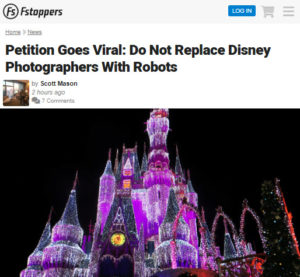 Cross-posted from Fstoppers
[by Scott Mason]

The “Robot Revolution” is already underway, but it’s meeting pockets of resistance, including one based in our photographic community. Fans of America’s most-visited theme park and photographers alike have recently banded together to save a small group of talented professionals from replacement by machinery.

Recent news stories have covered the emergence of animatronic photography, with most machines still in a “beta” testing phase.  And now photographers and fans of the Florida theme park are up in arms about the Disney Corporation reportedly gearing up to replace the park’s “Photopass Photographers” with photo booths.

A Change.org petition has been started to “Keep the Disney Photopass Photographers”, amassing well over 90,000 signatures by the time this article was written. The general consensus reflected in the petition’s comments section is that a robot cannot capture the real personality and “magic” of a moment as a human can. Silicon is long on hardware but short on heart.