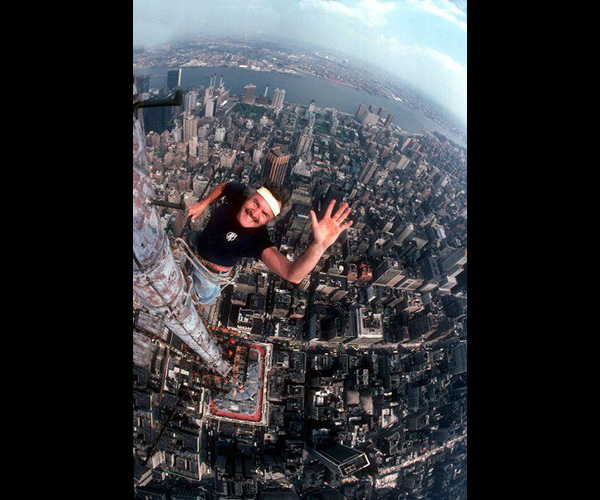 Peter B. Kaplan photographed atop the Empire State Building in 1985 by his then-assistant Aziz Rahman. ©Peter B. Kaplan, courtesy of Sharon R. Kaplan.

Editor’s Note: Peter B. Kaplan was an ASMP Life member. There will be a gathering to celebrate the life of Peter on
Sat, March 30th from 1-5pm at The Jackson Inn located at 101 N Dupont Rd Wilmington, Delaware.

Photographer Peter B. Kaplan, best known for the vertiginous photographs he shot from atop New York City buildings, bridges and the Statue of Liberty, died March 19 in Wilmington, Delaware. The cause of death was interstitial lung disease, resulting from exposure to airborne debris after the 9/11 World Trade Center attacks, according to Mary Engel, director of the Orkin/Engel Film and Photo Archive, and a long-time family friend. Kaplan was 79.

Known to friends and colleagues as “Peter B.,” Kaplan overcame his fear of heights to photograph from atop the World Trade Center in the 1970s. Starting in 1982, he documented the restoration of the Statue of Liberty on Ellis Island. Given unprecedented access, Kaplan amassed an archive of 125,000 images of the statue over 10 years. He also photographed from atop the Brooklyn Bridge, the Chrysler Building, the Empire State Building and other landmarks.

Kaplan mounted cameras on extension poles and used fisheye lenses to get harrowing perspectives from high places, long before camera drones were available. “He was Mr. Selfie before the selfie,” Engel says, adding, “He was larger than life and so passionate about everything he did.”