No CNN, Net 90 Is Not a Reasonable Payment Term 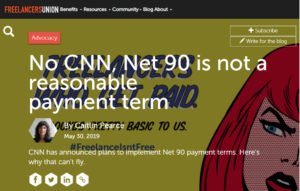 According to Twitter user Marcus DiPaola, CNN sent a letter to freelancers this week stating that as of June 17 of this year, it would extend payment terms to “Net 90” (payment 90 days after invoice). The letter also said that Turner is currently working with Citi on providing an optional program that uses a financing tool for suppliers — which would allow them to get paid before 90 days. On that, it said more details would be provided soon.

CNN claims that it is making this change to be “better aligned with its corporate interests,” and that it will be implemented as contracts expire. But Net 90 is NOT a reasonable payment term for people who must pay rent every 30 days. And in NYC, CNN’s new policy challenges the Freelance Isn’t Free law, which set a 30-day standard for payment and protects freelancers from accepting reduced rates in order to receive faster payment.