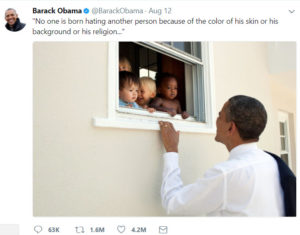 The tweet quotes Nelson Mandela. Former White House Photographer and ASMP Member, Pete Souza, is the creator of the image featured in the tweet that powerfully supports the message.

Media outlets including US News and World Report, Vanity Fair, FStoppers, Washington Post, Market Watch and several others have reported on the tweet as being a great example of truly Presidential behavior.